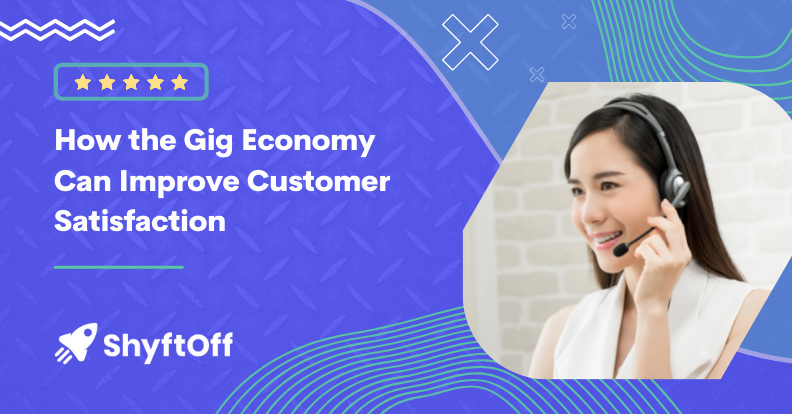 Three Ways the Gig Economy Can Improve Your Customer Satisfaction

They say there’s strength in numbers, which makes the collective group of freelance workers in the United States a truly impressive army of people. Statistics show that some 59 million Americans perform freelance work, a staggering increase from the 53 million recorded in 2014. For those who aren’t familiar with the team, a freelance worker is an independent contractor who performs tasks on a flexible and short-term basis, often for multiple organizations or entities at once.

Recently, freelancers have become more broadly labeled “gig workers,” drawing cues from the term given to musicians and artists who have occupied this space for hundreds of years. One area where gig workers are making a profound impact is in customer service—also known as GigCX and a trend that garnered interest from McKinsey & Company in 2021. While there are myriad benefits to using this model, today we wanted to focus on how gig workers can actually make your customers happier. Here are three ways the gig economy can improve customer satisfaction.

As anyone who has ever hired for a traditional, in-house contact center can tell you, filling the roles of customer service agents can be a challenge. It’s a job that can be stressful—but in small doses, some people find it to be a nice change of pace. A lot of customer service workers within the gig economy take on these roles in addition to full-time jobs elsewhere. In the case of ShyftOff’s GigCX agents, many of these gig workers have education and/or real-life work experience that far exceeds your average in-house contact center employee. And with that education and experience often comes better performance and handling of issues that drive increased customer satisfaction.

The gig economy is ideal for handling swings in call volume

Whether it’s because of seasonality, ongoing promotions or any number of reasons, it’s common for contact centers to experience ebbs and flows in call volume. This can be a problem for companies that utilize an in-house, full-time staff for several reasons. With this model, the only way to adequately prepare for call spikes is to add staff to answer phones—but when those spikes drop off, the business is left with a surplus of agents that hurt the bottom line. Meanwhile, the gig economy is built for these moments, as leadership can add or subtract agents as needed since they aren’t full-time employees. That means you’ll always have the right number of agents available to avoid long wait times without spending more than what’s needed on staffing.

In addition to the stress we mentioned earlier, burnout is a significant concern for agents working in a traditional model. It shouldn’t come as a surprise to anyone, but dealing with angry or frustrated customers on the phone for eight straight hours can lead to job dissatisfaction. The best way to avoid that burnout is to take repeated breaks throughout the day, but that’s not always an option if the company wants to avoid lengthy wait times. At ShyftOff, we support the gig economy and GigCX with a model that uses 30-minute “microshifts.” With us, agents self-select when they want to work and for how long. This process naturally encourages flexibility and helps workers avoid becoming burnt out. We’ve found that this keeps workers more engaged, willing and able to help customers with whatever they need.

Ready to learn more about the gig economy and how ShyftOff can improve your customer satisfaction efforts? Let’s talk today.