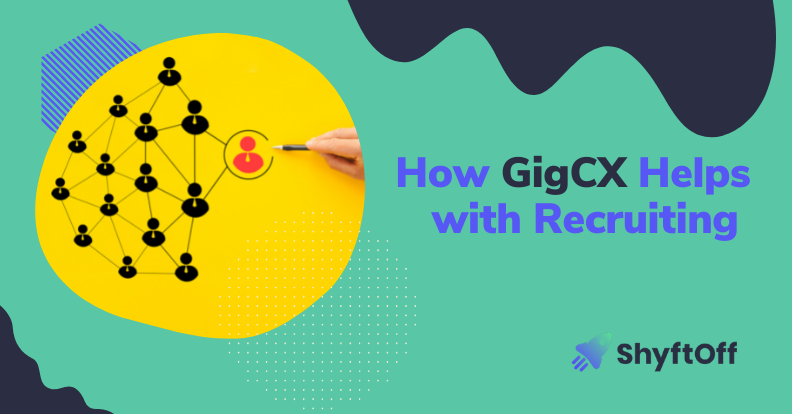 How GigCX Helps with Recruiting | ShyftOff

If there’s one person who knows a thing or two about successfully running a business, it’s Warren Buffet. That’s why this quote from the leadership guru and investor extraordinaire has always stuck with me: “Lose money for our firm, and I’ll be understanding. Lose one shred of reputation, and I’ll be ruthless.”

Though hiring the right people to uphold a company’s reputation has never been an easy task, a lot of business owners are finding it downright daunting in today’s current climate. However, smart and savvy leaders have discovered an alternative, turning to the gig economy to cure what ails their recruiting efforts.

For anyone who isn’t familiar with the gig economy, Investopedia has a succinct definition that perfectly encapsulates how it works: “In a gig economy, temporary, flexible jobs are commonplace and companies tend to hire independent contractors and freelancers instead of full-time employees.”

Gig workers are capable of filling just about every role, including customer service, as highlighted by a recent article by McKinsey& Company. “An on-demand revolution in customer-experience operations?” sung the model’s praises, citing advantages like employee flexibility and enablement to overcome geographic boundaries to expand recruiting pools. But one of the more significant benefits to GigCX is the type of person it attracts.

Why GigCX workers are right for your business

As we’ve seen with the great resignation, Americans are leaving full-time jobs in droves—and they’re not doing it over money. Most have experienced significant burnout, no longer possess a passion for their current role or employer, or they simply don’t want to work a traditional 9-to-5schedule. For a good number of those people, the gig economy (and especiallyGigCX) represents a chance to break free from that construct, empowering them to pursue their interests by working a flexible schedule.

The analysts at McKinsey said it best when they wrote,“Workers, for their part, get the opportunity to work with multiple client companies simultaneously, which can translate into broader exposure, potentially higher earning potential, and greater scheduling flexibility.”

Then there’s the freshness factor. GigCX workers at ShyftOff who are certified on multiple accounts have the luxury of variety, a perk that often prevents burnout and discontent. These are frontline, customer-facing workers who play an important part in safeguarding your business against bad reviews, so it’s safe to say that you want them at their best. As any business owner or leader can attest, an engaged worker is always a better performing worker than someone who is disgruntled or indifferent.

It’s also critical to note that, generally speaking, these workers aren’t uneducated or unskilled. In fact, of the agents used by ShyftOff and our GigCX model, about 80% have at least some college education. To provide some context, that number is about 20% in a traditional call center.

ShyftOff can also have a GigCX-backed concept up and running for a business in need of customer service support in as little as a few days.That means you can avoid recruiting, interviewing, hiring and overseeing full-time workers. We handle it all.

Let’s talk today about how GigCX workers make sense for your business.